Recently I have seen some blog posts about using Crayola Washable Markers for marking quilts instead of the blue washout markers we quilters have been using for years.  In the same discussions the Frixion pens, where the marks can be “removed” with heat are sometimes also discussed.

I decided to run some tests comparing the markers.  Recently I have been using the Frixion pens more than any other marker.  I recently learned that the Frixion pens contain two kinds of ink.  One is heat-sensitive and the other is not.  The heat sensitive marks can be removed with an iron, but will come back if the fabric gets very cold. This is an indication that the chemicals from the ink are still in the quilt.  Pilot, who manufactures the pens, states that the pens were not designed for use on fabric.  Therefore they make no statements about the long term effects of the inks on fabric. And, as I have blogged earlier, a white mark will be left on a bright colored fabric after the dark lines are ironed away.  This is because the ink is still in the fabric.  The white marks can be removed with an ink remover but will not wash out.

So– with some reservations about the long term effects of Frixion pens and some unwanted short term effects (think of shipping the quilt and exposing it to cold temperatures that way) — I was interested to see if the Crayola Markers (NOT crayons!) would be a viable alternative.

Here are my tests:

First, I marked some white fabric with the blue washout marker and with a blue Crayola marker.  The blue marker I used was the Dritz Mark-B-Gone, graciously given to me by Susan Travis of Creative Union Fabrics who was interested in my testing.   I don’t know if all blue markers will yield the same results, but I would expect something similar from other brands.

Dritz Mark B Gone on the left, Crayola on the right

Then I spritzed both sets of marks with a generous spray of cold water. As you can see, the blue washout marks disappeared.  The Crayola marks just bled and made a mess.

I then applied a paper towel to the Crayola marks to see if I could blot up the ink.  A lot of the ink was absorbed into the paper towel, but there was plenty left in the fabric. 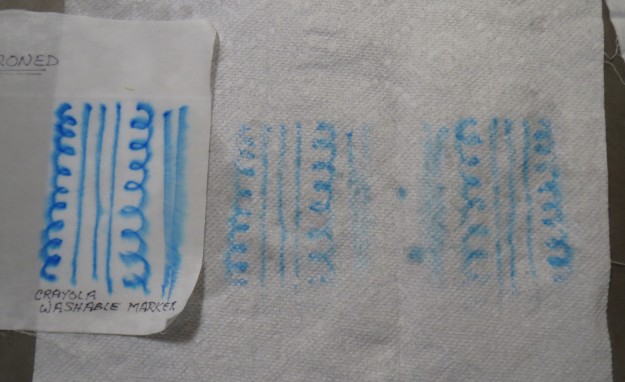 Even blotting with a paper towel didn’t help; lots of ink on the towel, but plenty left in the fabric.

I was in a hurry to finish my test so I ironed the damp sample.  The Crayola marks stayed about the same- ironing doesn’t seem to have any affect on the marks – but the blue washout marks re-appeared. The photo below is from another sample with only the Mark B Gone, but shows the result.

Oops! I ironed it dry and the marks came back.

Then I took the sample to the sink and rinsed it in cold water.  Although the marks became faint, they were still left in the fabric.  Then I scrubbed the fabric with warm soapy water.  Finally the blue washout marks were permanently gone.  The Crayola marks were nearly gone, but there was a faint shadow remaining that doesn’t show up in the photo.

Scrubbed with warm soapy water, and finally all the marks disappeared. There were faint shadows left by the Crayola markers.

If you plan to run all of your quilts through the washing machine when completed, then you can probably use the Crayola markers.  You should also seriously consider doing so if you mark heavily with the blue washout markers.  My personal solution is going to be to minimize marking if at all possible. Some temporary marking can be done at the last minute with chalk, since it comes off easily.  For a complex pattern that required marking, I might seriously consider copying the pattern onto tissue paper and sewing through it on the quilt.  And of course, changing the quilting design so it doesn’t have to be marked is even better.  The ruler templates I blogged about a couple of months ago are another option.  Proceed with caution!

© Shirley Sandoz and mysterybayquiltdesign.com, 2013. Unauthorized use and/or duplication of this material without express and written permission from this blog’s author and/or owner is strictly prohibited. Excerpts and links may be used, provided that full and clear credit is given to Shirley Sandoz and Mystery Bay Quilt Design with appropriate and specific direction to the original content.
Loading Comments...
%d bloggers like this: