I recently returned from a trip to Switzerland. While there, I visited a textile museum in St. Gallen.

St. Gallen is a town of 75,000 people located east of Zurich in the northeastern part of Switzerland. This area was historically active in textile production. About 200 years ago they also became heavily involved in embroidery, first made by hand, then by machines assisted by hand, and finally by machine. The area is currently known both for the quality of the embroidery they produce for leading fashion designers and also for the design and manufacture of high quality embroidery machines. This is also the same general part of Switzerland where Bernina sewing machines are made.

I didn’t know enough about St Gallen to have any expectations, but had done   internet research to find the textile museum, plus St Gallen also has an ancient baroque library with many books over 1000 years old, a large cathedral that had been part of a former abbey founded around 600 AD, and a large protestant church – St Laurenzen’s. Since I was interested in the textile museum, I decided that it plus the other attractions were enough to justify the one hour train ride from Zurich. I found the town to be beautiful and thoroughly enjoyed the day I spent there.

Now back to the textile museum. The museum was very nice but the explanations for the exhibits were all in German so I didn’t get too many details. There were numerous examples of embroidery. I will include a few photos here to show some of it.

First, some embroidered dresses that I believe were part of an exhibit called “furor floralis” that features floral designs. 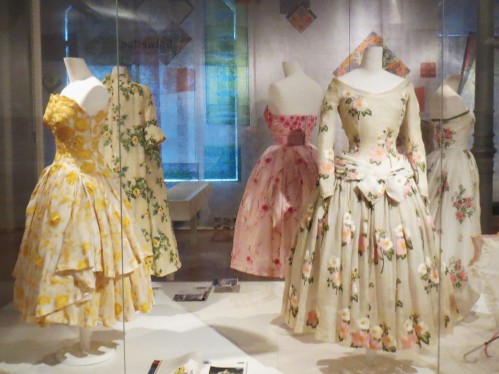 And a closeup of the one in front. This looks so perfect that I thought it must be  machine embroidery but  may have been done by hand by someone very skilled.

Many of the embroidery samples were part of an exhibition called Dreams and Realizations, described by the museum as   “From “white gold” linen to the world-famous “St.Gallen lace” to the high-tech textiles of today: the exhibition “Dream & Realisation” covers half a millennium of Eastern Switzerland’s textile history. Magnificent textiles from the Middle Ages to the present day demonstrate the master craftsmanship and innovative strength of this traditional industry, whose turbulent history has been driven by periods of great economic prosperity and global crises alike. ”

And there were many examples of whitework; this one had a lot of texture to it.

And some examples of brown embroidery: 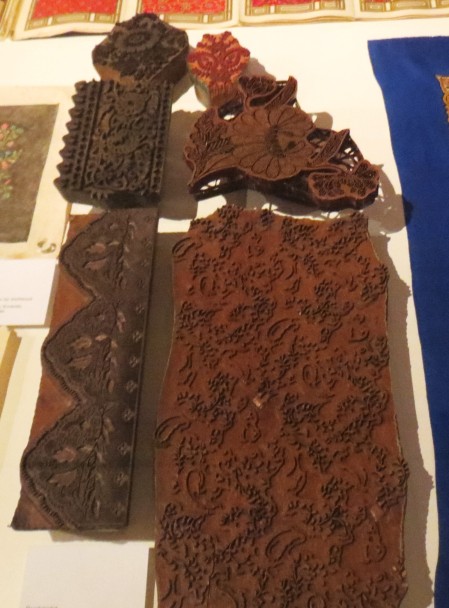 There was a special exhibit showing the work of a mother and son team of artists, Francisca Artigues and Miquel Barceló. He draws on linen with pens or watercolors and she embroiders on top of it by hand. Here are a couple of photos ; these pieces are quite large, seven to ten feet wide. I have included one closeup to show the stitching detail. 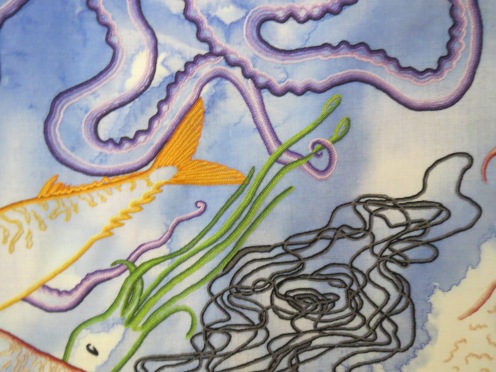 And because I can’t resist, I am going to break my own blog rule (nothing but quilting related topics!) and include an interior photo of the cathedral, which is really beautiful in an over-the-top way. 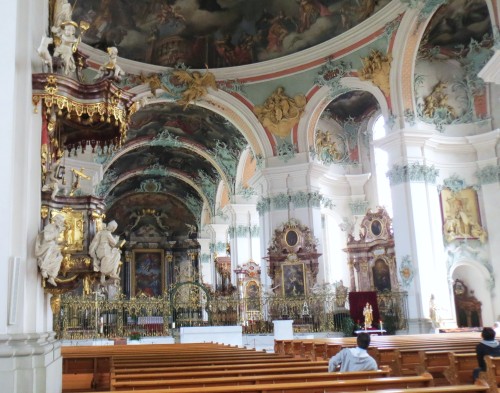 You can find lots more photos about St Gallen on line and see photos of the Abbey library which I was not allowed to photograph – it is even more over the top than the cathedral!

© Shirley Sandoz and mysterybayquiltdesign.com, 2013. Unauthorized use and/or duplication of this material without express and written permission from this blog’s author and/or owner is strictly prohibited. Excerpts and links may be used, provided that full and clear credit is given to Shirley Sandoz and Mystery Bay Quilt Design with appropriate and specific direction to the original content.
Loading Comments...